Talk about other games in here

I've installed that game and played the first section twice but never got beyond that. Don't know exactly why I never got past there before uninstalling it. Too many games, too little time... 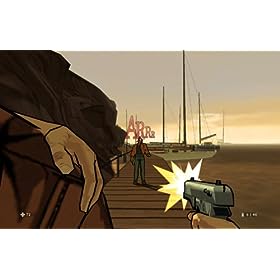 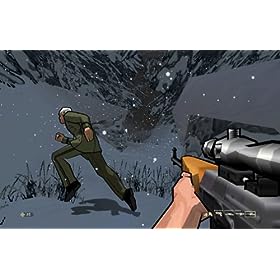 I've been playing this one lately. It is really cool. It uses cel shading, which makes it look like a cartoon. It plays like a cartoon also. It uses the Unreal engine. I also have Dues_Ex Invisible War, but haven't played it much. I really like XIII. If you really want to get inside a cartoon, this is the one!

You can see 'BOOM,' 'AAARGH,' and footsteps like 'tap' 'tap' 'tap' when someone is walking around a corner. Pretty cool

You did know it was a comic before it was a game, right?

No, I didn't know it was previously a comic book, but it plays exactly like one!

I was searching UBISOFT for another Far Cry because I liked it so much, and the cel shading caught my eye. I find it really unique in this sea of 'same ol FPS' games. I haven't found it hard to play, yet.

I picked up some more today

I like those aquarium screensavers and I had a few already

Today I picked up

The last one is really nice because you can actually make it an active desktop.
I also like Aquatica because they include a way to edit the fish and backgrounds
Even though Aquazone has compressed files I did figure out how to make my own fish skins by editing the archives file index.
spared-life.com

Sounds like you got quite a score there SparedLife! Some one should come up with a "Sims" mod where you get to edit / skin / modify SparedLife!

I played & finished "Marine Sharpshooter II" & i must say i was very suprised at how great of a game it was. You have certain expectations when you play a budget game but this game surpassed those expectations. Awesome implementation of the jungle crawl & good use of the stealth meter. The Missions themselves were almost epic like consisting of several large maps! The best 2 bucks i ever spent! :thumb:

I haven't seen A Scanner Darkly, but I've read the book! Very good, not always exciting or a pleasure to read, but very very good!

Anyway, it's not as cheap as the stuff above, but Introversion offers excellent original games for about half the price of most new titles.

Some one should come up with a "Sims" mod where you get to edit / skin / modify SparedLife!

They already have, it's called real life. My realself goes through much worse than I put these games through.

I have been re-exploring Driv3r this week after user Madness Productions emailed me with a query. I never played the actual game but I like the wide open area to explore. You can imagine the amount of damage I have done to this game in a week.

In Driv3r's case there isn't a lot of building you can go into, it seems like a waste of a big area map full of buildings. Maybe next week I'll get GTA3 installed since I really like GTA3:Vice City and San Andreas but never played GTA3.
I wish more first person shooters were made like the GTA series with a real city to explore. Like that discusting game (still among my favorite despite the content) Postal 2, you can play the map or play the game.

Both FEAR and HL2 were a disappointment to me because of this. I was kind of hoping they would be more like Warcraft or the GTA series in the world/map design
spared-life.com

I wish more first person shooters were made like the GTA series with a real city to explore.

Then keep an eye out for Huxley. It's (or will be) an MMOFPS.

As long as it's not online pay-to-play. I'd like to just walk around and explore WOW but not interested in paying to explore. I know people who have accounts but they are pretty touchy about others handling their characters.

Return to “OTHER GAMES”